Treasure Hunt 2018 – What On Earth Comes From Sweden?


Treasure Hunt 2018 – What On Earth Comes From Sweden? 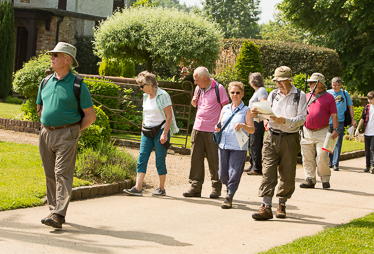 After much angst and crossed fingers about thunderstorms and weather warnings for flash flooding, the 8th St. Matthew’s Walking Treasure Hunt actually became the first one in some years to avoid any rain at all! There was no time to give thanks for any possible ‘divine intervention’ though as a total of 7 teams enthusiastically set off from Ranmore Common on a circular route that would pass through the vines at Denbies to the Stepping Stones pub in Westhumble; before a testing afternoon section with several steep hills – mostly uphill! – and a brief visit to Polesden Lacey.

The morning was all downhill and therefore a fairly leisurely affair with everyone, including the dogs, enjoying the good weather and keeping cool where possible. This was followed by very prompt service and an excellent lunch at the Stepping Stones, which was briefly interrupted while we heartily sang Happy Birthday to Emma Hallam.

It was after the steepest hill in the afternoon, however, where the majority of teams decided it was now too hot, that a nice chap standing outside his house first heard the words ‘what comes from Sweden?’. It wasn’t long before he was involved, possibly not his choice, and trying to think of anything around his property that could have come from Sweden… he could not! It won’t be a surprise to hear that this clue remained unsolved, possibly because it had become almost hidden due to an unfortunate growth in shrubbery. Hopefully that nice chap is not still looking for it…

Despite a couple of teams taking a slight wrong turn, everyone made it back to Ranmore Common before the 5.00pm deadline, although those who were later to finish missed the refreshment van which closed at 4.15pm!

The maximum points available was 280